Did the Sahaba Commemorate The Birthday of the Holy Prophet (صلى الله عليه و آله وسلم)? 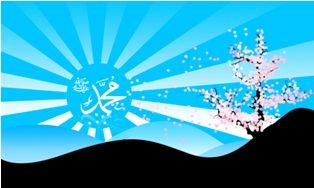 Yes, it is a well recorded fact that they did commemorate his birthday by fasting on Monday, like the Prophet himself did when he told them he fasted on Mondays because it was the day he was born (thereby commemorating his own day of birth), and also by composing and reciting poetry in praise of the Prophet (for example: Ka’b ibn Zubayr, Abdullah ibn Rawaha, Hassan ibn Thabit, Qurra ibn Hubayr, and many others), and through other expressions of joy, due to which he (صلى الله عليه و آله وسلم) would reward them greatly (as narrated by the compilers of Sira, such as Ibn Sayyid an-Nas in his Minah al-Madh, who listed the names of over 180 companions who composed praise-poetry for him صلى الله عليه و آله وسلم ). Anyone who claims otherwise, that the Sahaba did not commemorate his day of birth but rather ignored it, will have to answer before them on the Day of Judgment for his claims.

“And then, when you were born, a light rose over the earth until it illuminated the horizon with its radiance. We are in that illumination and that original light and those paths of guidance and thanks to them we pierce through.”

The light mentioned by al-‘Abbas is confirmed by the Prophet(salla allahu alayhi wa sallam) himself in the famous narration describing his own birth.

the Prophet said:“The night I was delivered my mother saw a light that lit the castles of Damascus so that she could see them.”

2) Ibn Hisham, in the last lines of his Sira, related that the poet of the Prophet (salla allahu alayhi wa sallam) Hassan ibn Thabit (RA) said:

“By Allah, no woman has conceived and given birth to one like the Messenger, the Prophet and guide of his people. Nor has Allah created among his creatures one more faithful to his sojourner or his promise than he who was the source of our light.”

This is clearly commemoration of his birth set in poetry.

“I say, and none can find fault with me/But one lost to all sense and kept far/My love shall never cease to praise him/It may be for so doing I shall be forever in Paradise/With the Chosen One for whose support in that I hope/And to attain to that day I devote all my efforts” (Sira Ibn Hisham).

The Prophet (صلى الله عليه و آله وسلم) has told us that “this Ummah will never come together (as a consensus) upon misguidance, and the Support of Allah is with the gathering.”

Tawhid Ar-Rububiyyah is the tawhid of Lordship. It pertains to Allah’s right as the Lord, and all that entails–the Creator, the Sustainer.

Tawhid Al-Uloohiyyah is the tawhid of worship. It pertains to Allah’s right to be worshipped, without any partners.

Tawhid Al-Asmaa wal Sifat is the tawhid of Allah’s names and attributes–such as that he is Ar-Rahman and Ar-Rahim.

Tawheed Al-Haakimiyyah is the tawhid of legislation that judgement/decree is for Allah alone.